He talks with a precision, grace, and artistry rivaled only by his jewelry and watch designs. As an international business man, Louis Danna has truly lived an intriguing life.

Louis was one of the first residents at The Woods apartments on the Warwick Woodlands Campus. He speaks five languages – French, Italian, German, Spanish and English – and he has traveled the world from China to England and Switzerland to Philadelphia and now calls Lititz home.

Born in Torino, Italy with the Alps rising to the northwest of the city, Louis grew up during World War II with bombs dropping around his town. His mother encouraged him to find a career quickly, that she couldn’t support him and he needed to get away from the war.

So, he studied jewelry and watch design. While working in Geneva, Switzerland, he drew up artwork and created the designs for necklaces and matching bracelets paring rubies and diamonds with other precious stones.

Rolex was impressed with his jewelry design and hired him. While employed there, he designed the internal parts of a Rolex watch. Louis expanded from watches to clocks, making many large time pieces. One of his most notable creations was the Liberty Clock (with a price tag of $3,500). It was in recognition of the gift of the Statue of Liberty from France to the United States.

“It is a very lovely clock,” Louis explained. “It was made in a limited edition of 300. I worked with the manufacturer and we gave clock No.1 to (President at the time) Ronald Reagan. Clock No. 2 we gave to President (Francois) Mitterrand of France. I received the No. 3 clock and donated it to the National Clock Museum in Columbia, PA. I have thank-you letters signed by Ronald Reagan and President Mitterrand of France.” 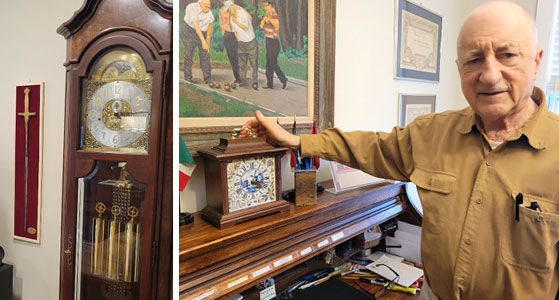 Another one of his favorite clocks is the Inclined Plane Clock (valued at $1,500). It runs for a full week and you don’t have to wind it, gravity moves it … a movement that was made in England. He also is proud of the Fan Clock, which is gold-filled with a diamond. “It is not very precise, but it doesn’t have to be,” he remarked. “It is a lady’s watch, and it’s very pretty.”

After working for Rolex, Louis came to the United States and worked for a company called Kreisler, with offices in Manhattan and New Jersey, for about 12 years creating jewelry and watch bands.

From there, he moved to a job at the Franklin Mint outside of Philadelphia where he served as Director  of purchasing and product development. Louis traveled around the world creating products, giftware, and clocks with prestigious clock makers of France, Germany, Switzerland, and England. In addition, he created glassware from crystal from Venice.

After the Franklin Mint, he started to design and create products for QVC. He developed a product, “The Dominique,” which became a fantastic seller. “We sold thousands of them!” he exclaimed. “It was inexpensive with cubic zirconia (simulated diamond) and that sold fantastically.”

Admittedly, Louis said his favorite job was at the Franklin Mint, developing things and seeing the world. “It is amazing the stuff that I did,” recalled Louis, who is also a talented painter and has many amazing art pieces in his apartment. “After I had trouble walking, I had to stop the traveling.”

Using his multiple language skills, Louis volunteered as a tour guide in Philadelphia at the Visitors Center. He met people from all over Europe and he referred to that as his reward for all his hard work.

Later this year, Louis will have about 40 clocks on display during a presentation in Steinman Hall, on the Founders Campus. In case you’re wondering how Louis found his way to Moravian Manor Communities, he saw a full-page advertisement in the Philadelphia Inquirer for The Woods apartments, made the move and has enjoyed his time here ever since.