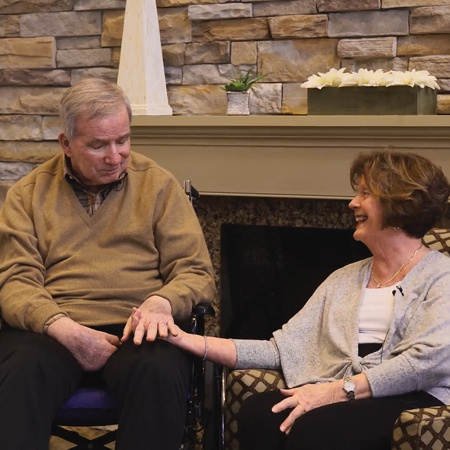 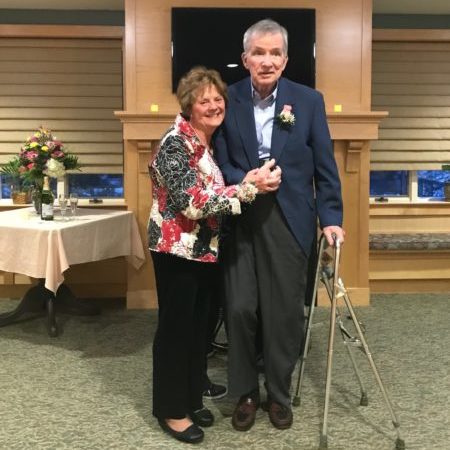 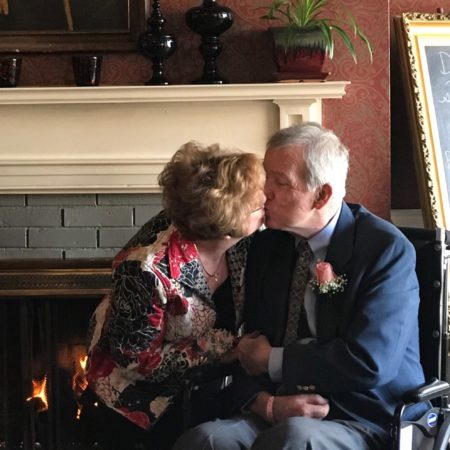 John became a resident in the Health Center Rehabilitation neighborhood after a stroke, and Georgine moved into a Warwick Woodlands carriage home a year later.

“In getting to know us through John’s recovery and hearing our stories, the staff at Moravian Manor Communities learned that we love to dance. When we would go to our place in Pensacola Beach, we would take drives on the beach road. And there’s a song that we love by Ed Sheeran and we would put that on the car radio and John would pull off on the side of the beach road and we’d get out, turn up the song real loud and dance to it.

During his recovery, after a period of time, John started to walk. And it was a really slow process, and everybody was very supportive. He would only get from his room to just a couple of rooms away, from point A to point B, and he’d stop and want to sit down. It was like he couldn’t progress past that point. So, two nurses were waiting in John’s room one day when he was done walking, and said, ‘We have a proposition for you. The very first time you walk from point A to point B and then walk back to point A, we’re going to come in on our day off and we’re going to arrange to take you and your wife for dinner.’ We had not been out since John took the stroke.

So, the very next day John walks from point A to point B and back to point A, the very next day! So that Thursday they called in the morning and said today is the day, bring in a sport coat and tie for John. We’re going to get him dressed up and you don’t come in until the end of the day until it’s time for us to go.  My daughter called in the afternoon and said, ‘Has Moravian Manor gotten in touch with you? Daddy’s pants don’t fit.’ I thought oh well, must not have be that big a problem or they would have gotten in touch with me. When I came over to the lobby, they were taking pictures of me pulling up in the car, seeing John all dressed-up in his sport coat and tie and gray pants. The nurses were down there and the aides too. I said, ‘Where did he get those pants?’ They told me Dr. Lynn Swisher (VP of Health Services) had gone out and shopped for him for pants so that he would have pants that fit him for the evening. We had a wonderful meal at the restaurant, and even Dr. Swisher came over to the General Sutter to make sure that we were okay, that everything was good. Where else would you find that?!

After dinner, back outside John’s room at the lounge area, a table was set up with a white table cloth, flowers (compliments of Dr. Swisher), two Champaign glasses and a bottle of sparking cider. Everyone was standing around waiting for us to get back. They had programed the song we love to dance to on the phone. Two of the aides had contacted our children, and they were there too so they could video us. Three of the nurses held John up with a gait belt and let us dance to our song. There wasn’t a dry eye in the house, it was wonderful. That is when I really realized that Moravian Manor Communities is not just a graduated care nursing rehab facility, it’s family. It is a family, and they care.”