Faye Kandra has lived in various locations at Moravian Manor Communities since 2013. Sadly, Faye’s husband, George, was a resident in nursing care and passed away prior to Faye’s arrival to her Manor Greene apartment.

Faye currently resides in Health Center West on the Founders Campus. When asked what she would say is her greatest accomplishment, Faye did not hesitate. “Marrying George and raising my family.” Faye and George enjoyed 63 years of marriage together, and raised their four daughters: Jill, Janet, Jeanne, and Jackie. Her family has been her greatest passion and sense of pride.

Another passion of Faye’s is her hobby of embroidery. Faye stated that she first began to embroider when she was between 10-12 years old. She was born and raised in the small town of Shamokin, PA, and she explained that in the summer, she and some other girls would go to Newberry’s store and buy square patterns (which were two for a nickel!) and work on their embroidery together as a neighborhood project.

Faye said she comes from a family of quilters, so needlework felt natural to her. However, she did not prefer quilting, sewing or crocheting, as much as she enjoyed embroidery. Her daughter still has a baby blanket that Faye made in her pre-teen years. 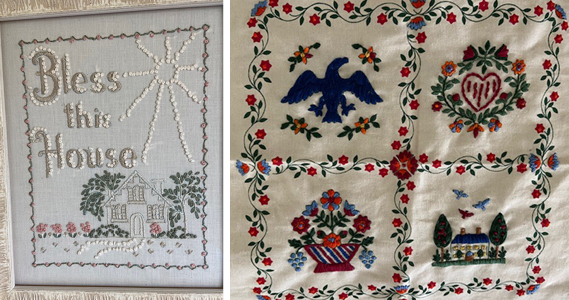 Through the years, Faye continued her hobby, but less during “the busy years of raising kids.” She met her husband George when he had returned to Shamokin after serving in World War II. They met “at a bus stop,” she said with a smile.

George went away to Penn State University to study Civil Engineering, and Faye would go and visit him on the weekends. Throughout their marriage, they and their four daughters lived many different places due to her husband’s career— moving 15 times throughout PA, NY, NJ, and CT. Faye also worked for Bell Telephone Company and held various receptionist jobs.

Faye says that in more recent years, her embroidery has been a wonderful outlet for her that helps her relax, and she enjoys using her beautiful artwork as gifts for her family, such as pillow covers, wall hangings, and most recently, a dress for her granddaughter. She currently is working on an embroidered marriage certificate and baby announcement. She estimates that she embroiders about 1-2 hours per day and she is always willing to show her latest projects to those who stop by for a visit.