It’s a beautiful day to meet one of the neighbors at Moravian Manor Communities! 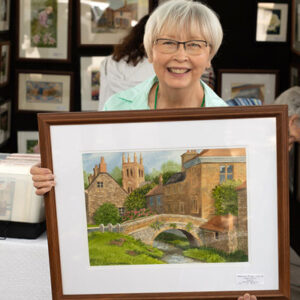 Sandy Roland doesn’t remember a time that she wasn’t drawing or painting. In sixth grade, a teacher commissioned the talented child and a friend to create holiday decorations and tallies for bridge classes. She has been a Lititz Outdoor Fine Art Show exhibitor for 40 years. The first show, she set up a display of watercolors on a stepladder. Today, with canopy and panels, she is deemed one of the more popular artists.

Sandy and her husband Tim graduated from Millersville University, but never had classes together. “We met on the boardwalk in Ocean City when we were both 20,” she commented. “We got married a year before I graduated. Then Tim was drafted and went to Vietnam where he was wounded. He got R&R on the base in Hawaii, and I met him there as soon as school was over.”

The couple settled in Lititz. Tim became a commercial credit banker with Fulton Financial. Sandy taught at the school responsible for Margaret Thorn’s foray into art shows. After their son Brad was born, she painted in abundance. Work was everywhere, so she started a business, which quickly attracted buyers and patrons.

The Rolands joined the Moravian Church, and Sandy volunteered at Moravian Manor Communities. Her father-in-law, Jim suffered a stroke and was a patient at MMC. She remarked, “I was very impressed with his care and the concern they had for him. When we decided to move to a senior living community, there wasn’t much of a debate where, but when. We had to sell both of our parents’ homes, and vowed we would not put our son through a similar ordeal.”

Keeping their promise, Sandy and Tim moved to a Warwick Woodlands campus carriage home last year. “I use one of the bedrooms as a studio,” she noted. “It’s so handy. In the past, before every show I had to carry boxes down the steps and retrieve the canopy and stands from the garage. We like everything about Moravian Manor Communities. Tim loves to work in the yard, and we enjoy activities, such as murder mystery dinners, wine and cheese gatherings, and bus tours. The location is extremely convenient. I frequently walk to downtown Lititz. We’re very happy.”