Shirley Hershey spent her first year of life on a family farm (304 Newport Rd., which became Forgotten Seasons Bed & Breakfast). Her parents lived on one side of the house, and her grandparents on the other. From age 1-12, Shirley lived on another farm on the Lititz Road in the Manheim Central School district. In 1960, she and her family moved back to the family farm on Newport Road, completing a circle with her birthplace. She and her four siblings, Henry, Sue, Doris, and Linda, graduated from Warwick High School. In 1966, Shirley set out for Harrisonburg, VA, to enroll at Eastern Mennonite College (now University). She tells the story of what it was like to grow up in a plain Mennonite family in her memoir Blush: A Mennonite Girl Meets the Glittering World (2013).

In college, Shirley joined the newspaper staff and there met Stuart Showalter, the editor-in-chief, who became her life partner in 1969. After two years of teaching high school English at Harrisonburg (VA) High School, Shirley and Stuart set out for graduate school at The University of Texas at Austin, where they both got doctorates. Stuart in Communication and Shirley in American Civilization. In 1976, they accepted positions on the faculty of Goshen College in Indiana. Soon after they arrived, their first child Anthony was born. Daughter Kate joined the family six years later.

Shirley was called to become the 14th president of Goshen College in 1996 and served for eight years. She still has a special love for that “spot in Indiana where the leafy maple grows,” to quote the opening line of the college alma mater. In 2004, Shirley accepted a position with the Fetzer Institute, a private operating foundation based in Kalamazoo, MI. She led the program division there for six years and had the pleasure of meeting many exemplars of the Fetzer mission to “foster awareness of the power of love and forgiveness” — including the Dalai Lama and Archbishop Desmund Tutu. She worked directly with Bill Moyers and indirectly with Krista Tippett, supporting their programming on PBS and NPR.

In 2010, it was time for Shirley and Stuart to choose the place for their retirement. They considered both Lancaster County and Harrisonburg, the places of their roots, but chose Harrisonburg because they fell in love with a house that looked directly over farms to the western mountains of the Shenandoah Valley. Stuart’s large family (six brothers and one sister) living in the area welcomed them, and Stuart accepted a part-time job as a development officer at Eastern Mennonite University, thus completing two circles: family and college. Shirley continued her writing and speaking avocations and served on the board of the Virginia Mennonite Retirement Community (VMRC).

When friends began to look at retirement communities, Shirley and Stuart put their names on the wait lists of both VMRC and MMC’s Warwick Woodlands Campus. They thought they would be ready to move in about 2022-25. But this past winter, two things changed their minds. First, their daughter Kate, husband Nik, and granddaughter Lydia decided to move from Pittsburgh to Lancaster. And then, the Bonfield house at 201 Osprey opened up. Becoming “roof mates” with their friends Jack and Gloria Rutt seemed like destiny. So, they took the plunge, sold their beloved mountain view home, and moved to the Warwick Woodlands Campus in May.

Shirley has written six blog posts, starting with this one, about the move so far. She and Stuart are telling everyone who asks about how much they love this community. They have enjoyed meeting many people here and hope to make many more friends as time goes on. Shirley is working on the final proofs of her new book written after Covid struck. It’s co-authored with Marilyn McEntyre and is called The Mindful Grandparent: The Art of Loving Our Children’s Children. Shirley and Stuart are grandparents of Owen (age 10), Julia (age 9) and Lydia (age 4). All of them love the Warwick Woodlands Campus too!

It is now 55 years since Shirley first left Lititz. To return home, all she has to do is get on her bike or walk to the Dean Saylor/Linear Park. She can visit the old homestead, now owned by her first cousin, or her sister Doris who lives on the hill. Her favorite walk is in the woods along the Santo Domingo Creek. That’s where she used to call the cows home to the barn, where she and her siblings splashed and picked mint, and where they would sled from the top of the hill to the creek in the winter.

There’s something very satisfying about the shape of a circle. Shirley loves to tell her grandchildren the stories of the circles in her life. And so loves to hear how other grandparents pass along their stories to the next generations also!

To learn more about Shirley and her writing, visit shirleyshowalter.com or www.facebook.com/ShirleyHersheyShowalter. 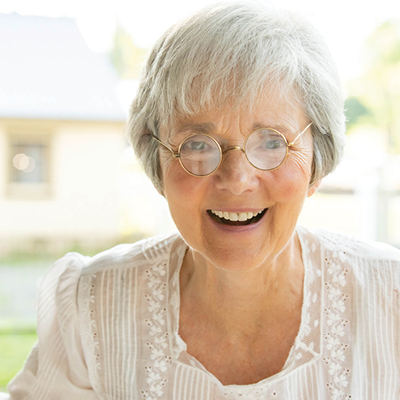 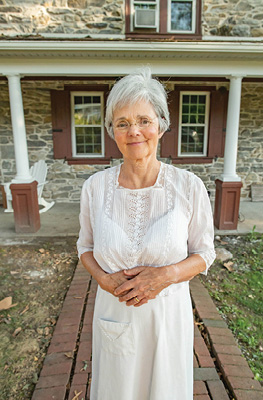 Wearing vintage spectacles and dress that belonged to her Grandmother Anna Mary Hess, Shirley stands in front of the Hershey Homeplace (Forgotten Seasons). For Lititz and Moravian history buffs — this house, built between 1735 and 1742, was Jacob Hoober’s tavern and was one of the places Count Zinzendorf preached during his trip through the colonies. After this visit, George Klein donated his land on which the original town of Lititz was built.