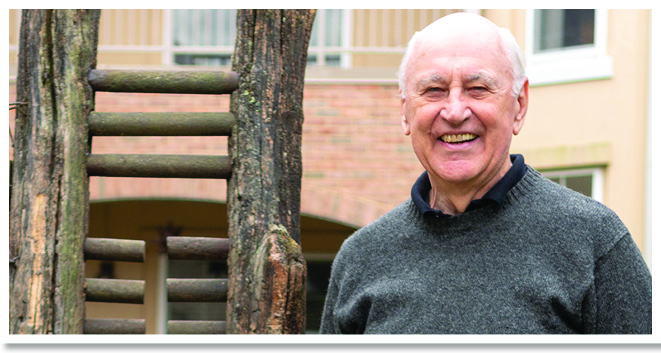 Look around the Founders Campus and you’ll see many original sculptures. But do you know the story behind them, or the man who created them?

Meet Milt Machalek … who has quite a life story as a self-taught mechanic, research physicist, guest of the Soviet State, US-Russian businessman and metal sculptor.

Milt was born into the Czech-Moravian Brethren Church and is 100% ethnic Moravian. Around 1900, his grandparents were part of a 100,000 migration of Czechs, Moravians, and Slovaks to Texas, so Milt grew up in a Czech community where they spoke the Moravian dialect of Czech in their home. At the age of five when his family moved to a 100-acre farm near Belton, 60 miles north of Austin, he was thrust into first grade and quickly needed to learn to speak English.

Milt spent the next 13 years growing up on the farm, disliking it. To pass the time, he took up tractor maintenance. In the ninth grade, Milt decided on his life’s work. Interested in electricity and mechanical things, he was determined to be a research scientist…a physicist. Milt graduated first in his high school class in 1959 and went on to attend Harvard with a generous scholarship.

He met his future wife, Roberta, to whom he’s been married to for 55 years, on a bus going from New York’s Port Authority Bus Terminal to Boston. She was returning home to Framingham after having visited a friend in New Jersey. Serendipitously, he was returning for his junior year at Harvard after taking a detour of a day to visit a high school classmate at West Point.

“As we stood waiting to board the bus for Boston, the bus completely filled and we were the only two left standing there. We were advised a second bus would come and Roberta and I were the only two on it…for four plus hours to Boston. Now, Roberta remembers that I came and sat down beside her, but I remember it quite differently. This cute Yankee girl came and sat down beside this naive Texas farm boy, whom she plied with a pastrami sandwich,” something he had never tasted before, Milt said with a chuckle. “After 55 years, we still disagree on the details of that trip. Nonetheless, she gave me her telephone number, we began to date, and then married at Harvard’s Memorial Church two days after I graduated in June 1963.”

It was his background in physics that protected him from the Vietnam War. “Many of my friends and former classmates either joined up or were drafted, and I was ready to face the reality. However, someone in the government decided I was more valuable doing nuclear physics research than carrying a gun in southeast Asia, and so my deferment was extended.”

While enrolled in the physics graduate program at the University of Texas, he joined the newly formed Center for Plasma Physics and Thermonuclear Research, whose aim was to find peaceful sources of nuclear energy. A rare opportunity, he made a discovery of the detailed physics mechanism that occurs in the earth’s magnetic field to deflect the sun’s radioactive “solar wind” particles from reaching us here on the surface of the earth.

With a PhD in hand, Milt was immediately offered a position in plasma physics research at the Los Alamos Scientific Laboratory in New Mexico. Within days of this, they discovered Roberta was pregnant and with Los Alamos being at 8,000 feet, they didn’t want to have her first pregnancy at that elevation. Instead, Milt asked for and received a postdoctoral research position in the Physics Department in Austin, while Los Alamos held his position for a year.

In April 1973, with their three-month-old son, Milt and Roberta headed to Los Alamos, whose mission was to harness the awesome power of the atom for the peaceful production of clean energy. (side note: Los Alamos was the place in the 1940’s where the first atomic bomb was developed in super secrecy. In the 1970s, half the laboratory was engaged in weapons and half in non-weapons scientific research.)

Despite the Cold War between the West and the Soviet Union, both sides were trying to cooperate in the pursuit of Controlled Fusion Energy. Both sides had sent delegations of

scientists back and forth for short exchanges. Unbeknownst to Milt, the US and USSR were devising a pioneering plan for a young, Russian-speaking plasma physicist and his family to travel to the Soviet Union for an extended stay. While at Harvard, Milt learned Russian, close in many ways to his native Czech. And with a young family, Milt was the perfect candidate. He received a two-week, VIP Tour of the Soviet Union and then a year later travelled back, with

Roberta and his three-year-old son, to Leningrad. “Each of our visas said ‘Guest of the Soviet State!’” he explained. For the next four months, they had an adventure of a lifetime.

After six years at Los Alamos, Roberta desired to move back East to be close to her aging parents in Massachusetts. Coincidentally, Milt knew the director of the Office of Fusion Energy as they both were new PhD’s doing post-doctoral assignments at the same time at Texas. A short yet fruitful call to her opened the door at Princeton University’s Plasma Physics Laboratory, where they were constructing the latest and largest fusion energy research machine in the world.

With the fall of the USSR, the funding for fusion research was greatly curtailed. In 1991, Milt began a consulting contract with American Re-Insurance Company, working to make quiet inroads in Russia. He began traveling every few months to Russia, sometimes staying for weeks at a time, overtly looking for intellectual property that Am-Re might acquire and commercialize in the West.

During this time, Milt decided to create his own company, and in 1992, incorporated four companies in the US. He formed an agreement with a Russian physicist and together they started exporting high purity niobium metal (used to make super conducting wire for MRI machines) from Kazakhstan to the US. Around 1995, the business partners turned things around and began shipping reflective building insulation into Russia. This too became a booming business, and in 1997 he and his family bought a ten-acre, historical farm in Conestoga Township, Lancaster County. However, a year later, value of the ruble collapsed, and within 30 days his company was out of business.

After the ruble crisis, Milt was at loose ends. During his “idle time,” he turned to his self-taught mechanic ways working on his classic car collection, a 1935 Bentley, a 1961 Rolls-Royce and a 1965 Ferrari. He repaired just about every component of a car, and invested around 2,000 hours in restoring the Rolls-Royce engine in the ‘35 Bentley. He also began making sculptures, placing them around the farm property, as well as smaller pieces for inside.

In 2001, he joined the newly retired CEO and owner of Thermacore in forming a new company, STAR-H Corporation, based in State College, a tiny high-tech company designing and producing highly specialized radio communications antennas. He’s served as CEO for the past 10 years and still holds this position today.

Milt and Roberta eventually began thinking about moving to a retirement community, realizing that they couldn’t stay on the farm with all the constant maintenance it required. The process took about four years, but in March 2017, Milt and Robert moved into the Garden Court Apartments at Moravian Manor. But Milt had more than 20 pieces of outdoor sculptures on the farm that presented a dilemma. As an unknown artist, he attempted to sell the pieces to no avail. After discussions with David Swartley, the Manor’s CEO and President, a deal was made to bring the pieces to reside on the Manor campus, to share with the community.

“I am deeply grateful for the good fortunes that have come my way, and continue to come my way, in my life,” stated Milt. “Having traveled extensively in the world, particularly in parts of the former Soviet Union and India, I often think, ‘What if I had been born there?’ What if I had no chance whatever for an education, living in squalid poverty, struggling each day simply to find something to eat and dying before I reached even 40? I am deeply grateful and I hope in my several ’lives’ so far, I have made some positive contributions to my fellow human beings, to all of whom I recognized I am connected.”

Milt has a constant reminder about the preciousness of life and his existence. “On the back window of my truck, I have a sticker that says, in my native Moravian language, ‘Nic Netrvá Věčně,’ ‘Nothing Lasts Forever.’ The past is gone forever except in memory. The future exists only in imagination. Only the present moment exists in reality.”